Vectorworks introduced 2019 Version of Its Software

Some days ago, Vectorworks launched the 2019 version of its BIM software, along with updates to add-ons Architect, Landmark, Spotlight, Fundamentals, Designer, Bracework, and Vision.

In Vectorworks 2019, focus is given on the customers' most common workflows and usage patterns to raise their overall productivity with Vectorworks products across the board.

In Vectorworks 2019, it is possible to apply the Clip Cube option on sheet layer viewports. Clip Cube facilitates the user "clip" away segment of a 3D model to view and work inside of it. This feature can now be used on sheet layer viewports. Another significant enhancement to 3D modeling is inclusion of a tool that allows the designers to "contour" the land of a building in such a manner that they don't require to change the building manually.

The product's workflow is also enhanced significantly. With the new Data Tag tool in Vectorworks 2019, it is now possible to efficiently tag and illustrate data on intelligent objects which facilitate the users to either tag objects separately or tag multiple objects at the same time. Besides, the layer and class list is now keyword-searchable, allowing the designers to obtain layers devoid of manually searching through the list.

"Vectorworks 2019 is a release that will provide a significant effect on productivity, facilitating the designers to make their day-to-day design work rapidly and easily. The method of opening files becomes four times faster.

For 2D documentation, another significantly enhancement is the capability to quickly produce the 2D drawings from 3D and BIM models of hybrid objects. The users can select the view for an object (top down, front on, side view, etc.). Another exciting feature is viewport image effects which permit the users to edit images right inside of Vectorworks. So, it is now possible to create any presentation boards devoid of applying an external program like Photoshop.

Presently, the software is accessible in English language only and later on the software will be available in European, Australian and New Zealand editions, then Spanish, Brazilian Portuguese, Japanese and Chinese versions. 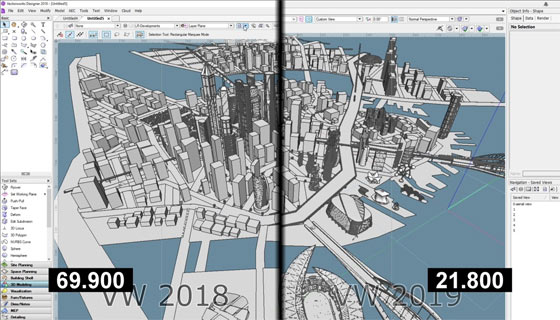