Autocad: It is 2D or 3D computer supported drafting software program used to make blueprints for buildings, bridges and computer chips and used in architecture, construction and manufacturing.

Operating AutoCAD is depended on some commands and people can create their own set of mostly used commands to normalize in a few steps. Here is a list of only 50 usable commands that can speed up the work game, find new shortcuts or have some easy to use tools to control the project if they forget the commands they need.

1. APPLOAD: it can loads and unloads applications and specifies the applications that need to load at startup. The Startup Suite option loads the specific application whenever the product begins.
2. AREA: the area and perimeter of the certain object are shown at the Command prompt and in the tooltip and the MEASUREGEOM command gives extra measurement options. The BOUNDARY tool can be used to create a closed region and the Properties palette can find the area.
3. Background: while choosing a background image for the work area it can be a solid in color, a gradient in color or an image from the computer.
4. BMPOUT: it is called bitmap file that contains the selected objects made by the users, the file shows what is shown on the screen. Generates a bitmap image or .bmp format after selecting a series of objects, surfaces or regions.
5. BOX: it is used to create box with a specified center point or of sides of equal length or can create a box with length, width and height specifically given.

6. BURST: it expands a block or an object but keeps the qualities same, this is a highly essential tool.
7. CHSPACE: the selected objects are scaled automatically in the new space, objects can be moved from the layout to the model and conversely.
8. CLOSEALL: it opens up all the closed AutoCAD windows and if there are any kind of changes to any files is done which is not saved then this command will ask users to save.

9. COLOR: sets the color for new objects, a layer color can be chosen for future objects, lines and surfaces.
10. DIMALIGNED: shows the In-Place Text Editor that can be used to edit the dimension text and the displayed measurement is represented with angle bracket and a dimension can be created aligned with a circle or arc.
11. DIMBASELINE: it creates a linear, angular or coordinate dimension and the work starts from a baseline of an earlier dimension.
12. DIMRADIUS: it creates a radius dimension for circles and arcs.
13. DIMTEDIT: this command is used to change or restore the location of the dimension line.

14. EDGESURF: creates a mash between four adjoining edges or curves.
15. EXPLODE: breaks a compound object into its component objects while modifying the components separately.
16. ID: shows the coordinates of any point on the worksheet.
17. LIGHT: controls lights and its effects on 3D models.
18. LINETYPE: creates, manages and selects line types.
19. MATLIB: it can import and export materials from and to a library.
20. MLINE: creates multiple parallel lines.
21. MLEDIT: it edits the lines.
22. MULTIPLE: continues next command again and again still stop.
23. MVSETUP: fix the layout of a drawing.
24. OOPS: restores the recent deleted items.
25. OVERKILL: goes through the entire model and deletes the duplicate and overlapping items to make the model smooth.
26. PAGESETUP: defines the page layout and adds more to the plotting device, paper size and other settings for every new layout.
27. PFACE: creates a 3D mesh height by height.
28. PREVIEW: shows the model before printing.
29. PURGE: it deletes unused objects in the drawing through a series of filters.
30. QDIM: after select any object it can create a dimension quickly.
31. QLEADER: creates a leader and a leader annotation fast.
32. QSAVE: it auto saves the file while working and gives a name to the unnamed files.
33. QSELECT: it can select objects quickly as per list of filters.
34. RECOVER: regains a damaged file.
35. RENDER: creates a render of the current model.
36. REVOLVE: makes revolved solids by moving 2D objects around a user defined angle.
37. RULESURF: creates a surface to join two previously defined curves.
38. SAVEALL: automatically saves all drawings.
39. SHOWMAT: shows a set of information for a selected object.
40. SKETCH: makes a series of freehand drawing things.
41. SPELL: checks the spelling.
42. SUBTRACT: creates a region from a solid and region by subtraction:
43. TABLET: adjusts a tablet.
44. TIME: shows a statistics table of the recent file with every time of updating, editing and making.
45. U: undoes the mistakes.
46. UNDEFINE: undoes the deleted command.
47. VPORTS: controls AutoCAD windows for 2D and 3D models.
48. XLINE: makes an eternal line.
49. 3DSOUT: export files consistent with 3D studio.

For more information, go through the following link www.archdaily.com 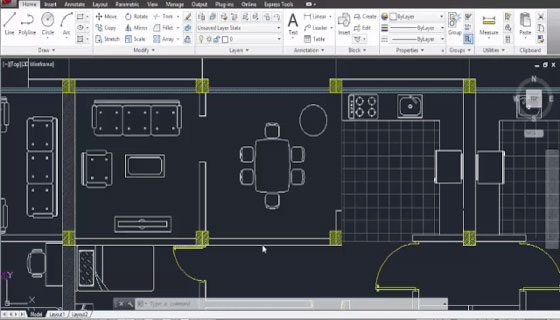