How to Import Point Cloud through Archicad and Vectorworks

How to Import Point Cloud through Archicad and Vectorworks

Point cloud is a set of data points in some coordinate system. In a 3D coordinate system, these points are usually defined by X, Y and Z coordinates which often represent the external surface of an object. It can be produced with three-dimensional scanners. The measurement with laser scanners and working with point clouds offer many advantages. If there is a good preparation in terms of hardware and software the organization can achieve a good result.

At American Institute of Architects Convention 2015, two leading BIM software developers Nemetschek's Vectorworks and Graphisoft's ARCHICAD announced that the software users will be able to import laser scan point cloud data very soon. Autodesk's Revit was the first software to introduce this feature with its 2012 version. Now there are more upgraded options available in BIM platform, so let's watch how it will affect the industry and users.

It is a great opportunity for Vectorworks and ARCHICAD users to get the ability to verify and model existing conditions more easily. Nadia Anis, Principle Architect with Ferrari-Moe, LLP Architects | Engineers in San Rafael, California uses Vectorworks in practice and has been a great promoter of bringing laser scan data into her projects since the inception of the technology. She said that the ability to bring the point cloud directly into their modelling software will be a tremendous advantage for them. Ferrari Moe has vast experience working on heritage projects as Nadia does, also serves as the Chairperson on the U.S. Institute of Building Documentation's (USIBD), Heritage subcommittee (www.usibd.org).

Mr. Sean Flaherty Nemetschek Vectorwork's CEO said their goal is "to bring back design to architects". He also stated "this construction industry has to change by using the same technology as manufacturing. Prefabrication favours software. Building a product that's ready for this is the future." Nemetschek Vectorwork's CTO, Dr. Biplab Sarkar supported Mr. Sean's word.

This is great news for professional that works with ArchiCAD 19, Graphisoft's upgraded BIM software. It has the capability to perform easily, efficiently and quickly with various types of architectural BIM models ranging from design to implementation. ArchiCAD 19 can be applied to draw a point cloud in ArchiCAD. The point cloud and ArchiCAD can be interlinked through a software program called Points4BIM. So, it becomes possible to deal with point cloud as well as landscaping. Graphisoft has introduced the concept of tabbed workspaces which work in a very similar way to tabs in a web browser, but each tab contains a workspace. This makes it much easier to flip between sections, model view and drawing view. 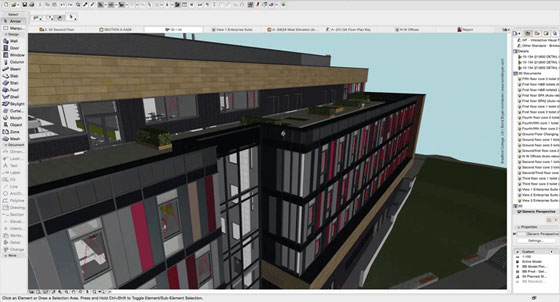