The Top BIM Projects in the World to be ever made

The popularity of Building Information Modelling (BIM) is due to its ability to simplify the construction of complex AEC projects. A number of innovative and large-scale projects have been visualized and documented virtually using BIM methods.

BIM has improved AEC collaboration and meticulous documentation of building information by providing data accuracy, vivid simulations of construction sequences, and enhancing data accuracy. We will examine the projects that demonstrate some of these features.

China's emergence as a nation is reflected in the Shanghai Tower's unique form. The spiralling form represents its spiralling nature of it In addition to this, the tower is also the largest financial centre in East Asia. As a result of a multi-staged design competition held by the Gensler Company, this design was selected as the winner.

The use of BIM was key to the success of the Shanghai Tower construction effort, which involved thousands of people. More than 30 companies were contracted to provide design, structural, mechanical, electrical, and fire safety consultation for the project.

Additionally, dozens of professionals were contracted to help with the foundation phases of this project, as well as the machinery it required. As a result, BIM was able to bring together a massive pool of human resources under one goal. There was no doubt that BIM played a vital role in the successful completion of this project on time and within the set budget.

Since 2010, WeWork has been offering shared workspaces, and community and business services to gig economy workers and business owners such as freelancers, startups and small businesses.

The WeWork company also provides space for divisions of larger companies to rent out. Since WeWork is a company that specializes in a certain type of work, the company requires the leasing of spaces where pre-existing floorplates are inaccurate and requires a smart spatial planning in order to meet the needs of its clients.

Among the features of Scan To BIM that WeWork actively uses is the ability to use point clouds to create a 3D model of a workspace, and this data contains rich 3D information.

The site's restricted space and increased built-up area requirements presented this tower's designers with their biggest architectural challenge. The specialists at IF Architects employed Grasshopper-Rhino tools in parametric design processes, and BIM was able to transform those designs into finished products. The firm, Permasteelisa, formed a cooperation with Autodesk to use the architectural design all the way through construction.

With progressive floor plate areas with higher stories as the notion and parametric elements as the subject, BIM usage for precise tracking of the tower's 3D growth became necessary.

The project's size necessitated the pooling of several human resources under a single umbrella of coordination, and BIM suited this goal.

Turner Construction Company developed and built the central utility plant for the airport. The plant, an 8,300 square foot facility, required architectural improvements, increased interior space, and extensive MEP expert engagement to guarantee the plant operates with little disturbance. The effectiveness of this facility was crucial to the operation of the airport.

This structure required the integration of electrical switchgear and mechanical equipment including boilers, pumps, and chillers. It was therefore necessary to collaborate with multiple subcontractors.

Consequently, BIM was used to model the extensive HVAC network of the plant. In a similar fashion to the Shanghai Tower, this somewhat meticulous project required a large pool of consultants. After seeing BIM's crucial role in aiding these consultants, the project clients asserted its use throughout the entire project.

A fire breaks out at the original Silver Oak Winery premises. BIM is recommended for its rejuvenation in order to prevent future fire outbreaks and visualize a resilient winery campus. BIM 360 had been used by the architect and contractors to effectively design and build the new proposals.

Randselva Bridge is the epitome of technical prowess and structural excellence. This concrete box girder bridge is 634 meters (m) long and was built near Oslo, Norway's capital. Six piers range in height from 5 to 42 meters, and its main span is 200 meters. Its complex geometry was constructed using the balance-cantilever method.

It was necessary to collaborate between four locations for the design of this bridge, and BIM further outlined the technical complexity of this project. It's hard to believe, but there were no drawings for this project.

BIM's parametric features helped design 70% of this project, which contains more than 200,000 rebars and 250 post-tensioning cables.

In Bangkok's urban centre, there is this multipurpose commercial complex. By constructing a large-scale, sustainable building complex, the clients wanted to set an example. Through sustainable approaches in design, construction, operation, and maintenance, a 17-acre urban plot was transformed into a smart city model.

BIM technology, in conjunction with software products from the partner company Autodesk, was used in this project to analyze the design's energy efficiency and devise environmentally friendly methods for disposing of the waste. 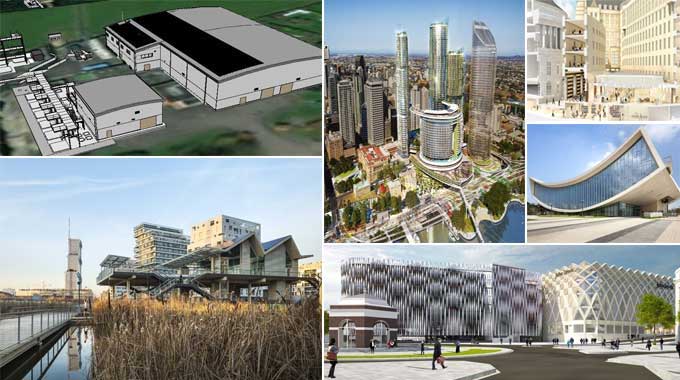