The success stories of BIM at airports around the world

The construction site employs thousands of people every day. It would be impossible to communicate every bit of change in design across such a large number. This airport is using BIM in the construction process, time extensions, cost overruns, and other unexpected claims.

Today, a building's ability to integrate technology makes it stand apart, and BIM, when implemented from the very start, allows us to do just that. Building, transforming, or reconstructing an existing building becomes easier with BIM.

Importance of BIM in Airport

It is complicated to build large-scale projects like airports & even more difficult to manage.

A BIM project involves more than just drawing a design; it involves building it, and this unique feature makes BIM valuable for large scale projects. As a result, the technology can reduce costs, coordinate material procurement and planning, detect clashes, and improve collaboration during the build phase.

A BIM model provides a reliable base design for defining management plans and gauging a facility's carbon footprint, which is important for optimizing ongoing operations.

BIM has been discussed in the past in public infrastructure projects in India. Mumbai International Airport has also benefited from BIM expertise.

BIM Design: Bangalore’s KIA's T2 terminal was the latest infrastructure project to be equipped with BIM technology. It was possible to develop new and innovative infrastructure through BIM, thus setting new benchmarks. A full BIM lifecycle integrated into the project throughout its lifecycle.

Both terminals had a combined capacity of over 70 million passengers per year. The first phase was in operational, according to the government. BIM could play an important role match the pace of project completion.

A new international airport was being built in Istanbul, Turkey, which will be the largest airport in the world. With the first phase set for completion in 2018, the new airport was constructed from scratch in four phases.

BIM Design: One terminal, three runways, and an air traffic control tower were part of the first phase. The airport was completed and fully operational, 200 million passengers served annually. The clash reports were issued and assigned to relevant parties as well as updated through BIM for the rest of the team.

Considering the rapid development of the aviation industry today, it was critical for us to develop outstanding standards according to our baseline schedule, as well as compared to other projects worldwide. In addition to creating an airport, they were also creating value for people. This super megaproject was impossible without BIM.

The construction agency was faced with the complex task of considering the existing structure and integrating it with the vast new one.

BIM Design: Six of these anchors had to be removed over the course of building a hotel and incorporated into the design of the building. A hotel, public plaza, and transit center were built next to the south terminal of Denver International Airport, one of the largest airports in the world.

The design team also had to accommodate the movement of the roof of the south terminal due to weather. Located in the south terminal is an iconic roof made from fabric and held in place by steel cables with tie downs that anchor the roof to the ground. A roof can move upwards of 18 inches due to weather conditions. That was meticulously planned with the aid of BIM based virtual models. As a result, the team could design the structure more efficiently and quickly.

As airports have evolved from landing and taking off locations for aircraft, they have become tourism, commercial, and cultural hubs for residents and visitors. Today, airport terminals and control towers play more than simple functional and operational roles.

They are landmarks, signposts, and cultural symbols. A design based approach to this will have ramifications. The BIM technology offers a unique solution for the construction of marvelous structures by optimizing costs and schedules.

In addition to these major airports, BIM is already being used in many smaller airports. 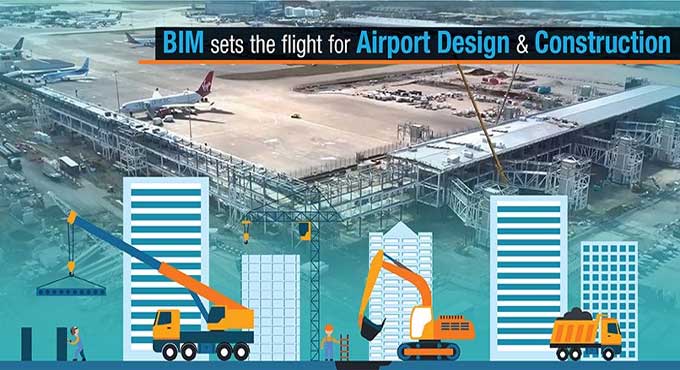