If you're an engineer, an architect, a planner, a digital artist ? or if you are a student aspiring to be such ? then the first thing you will need is a CAD software. Gone are the days of hand-drafting engineering drawings, come are the days of CAD and BIM. So, today we will talk about the best 10 CAD software for engineers or students.

The acronym CAD stands for Computer Aided Design ? a word almost as old as graphical computation itself. Commercial CAD software existed back in the dark depth of eighty's even. From then, CAD software have improved from 2D drawings to 3D modeling, and even to BIM (Building Information Modeling). You can use one among any of the following best 3D CAD software available in the market.

Among the most versatile 3D modeling software, Rhino is arguably the best. The wide range of design features it offers makes it a very adaptive software indeed ? though that means it is harder to learn, navigate through, and arrange the intricacies of multitude of tools and sub-features that Rhino offers.

A mathematical system called NURB drives the core of Rhino, allowing the user to make and manipulate all sorts of shapes and lines in 3D, like points, curves, meshes, surfaces, solids and more. This system also makes it one of the most precise 3D modeling software on the market. However, it is quite certain that Rhino is a tool for the power users; the inexperienced will get confused.

You don't expect to see many free CAD software in 2021, but here's a brilliant one. A pro-grade 3D modeling software, OpenSCAD excels at solid modeling. Like the above, it is also aimed at experienced users only. OPenSCAD makes use of its high precision programmed modeling technique best suited for giant projects requiring consolidation of many small parts with constructive solid geometry and 2D extrusions.

The biggest problem with OpenSCAD, however, is how it works. It is a programming driven interface where you don't draw so much as you code it out. Therefore, only engineers with strong programming knowledge will be able to handle OpenSCAD. Luckily the freedom from purchase makes it accessible to all enthusiasts.

Well known and appreciated among aviation engineers, CATIA was designed at first for Dassault's own aerospace division, and then it spread out. An outstanding software to create and simulate mechanical engineering models, it is not only a CAD software but also CAM (Computer Aided Manufacturing) software which you can hook up to your automated factory to direct make the thing as you create it.

CATIA uses Dassault System's 3DEXPERIENCE platform, which is at its best for product design and development and also for creative design. When you need to mix sleek with fast, use CATIA. It is a great industrial design software, spectacularly expensive, and a great collaborative platform to boot.

Needing no introduction, AutoCAD is perhaps the most well-known CAD software since forever. Existing from 1982, this CAD program has evolved with time as technologies improved. AutoCAD is used across multiple industries from construction to automobile. Its command-driven approach is easy to understand for beginners since it uses mostly existing drafting terms for the commands.

For 2D drafting, AutoCAD is unbeatable. However, doing 3D work in AutoCAD can be hectic since the macros and scripts used for 3D surfaces are quite difficult to learn. This has become simpler over the time with the interface favoring the mouse more. And now it is supporting BIM type development as well with AutoCAD 360 option.

A more common software form Dassault again, Solidworks is immensely popular among car manufacturers due to its excellent metal surfaces handling. This parametric 3D modeler is best at industrial designing and curves in gently inclined flats.

Instead of the standard polygonal modeling, Solidworks uses the NURBS system, utilizing dimensional sketching which is great at making extremely detailed curvatures and solid resizing. Solidworks can also work in tandem with the factory to manufacture as you create. However, there is no dire 3D printing support in this software.

One of the few cloud-based 3D CAD software existing today, Autodesk Fusion 360 is gaining popularity quickly. It is actually part of a BIM platform that allows the AEC consortium of a project to utilize VDC (Virtual Design and Construction) for any projects light to heavy.

Using many types of design options together like freeform, solid, and mesh modeling, Fusion 360 is versatile CAD software useful in any kind projects from architecture to electromechanical. It runs on multiple platforms and has many sub-apps that integrate project stakeholders at different levels to view and collaborate with the VDC. The program has a very nice, easy interface that is good for professionals at any level.

Creo is another 3D CAD software leading in product development. Made by Parametric Technology Corporation, it was developed 30 years ago and has been quite successful from since. Creo integrates many facets such as thermal, structural, motion, parametric and freestyle surface generation, and direct modeling.

Ideal for manufacturing lines, Creo 5.0 is the latest version of the software, released back in 2018. It now features a much better user interface for easier handling and they also offer a free trial period of 30 days, after which a $2310 single license charge is applied.

This is an educational CAD software on our list of best 10 3D modeling software. BlocksCAD can be considered a stepping stone for OpenSCAD, and is targeted towards students and programming design novices. The commands and their objects and their transformations are represented in nice LEGO-like colored boxes easy to identify.

The program is fully inter-compatible with OpenSCAD, so you can import and export between these programs. Furthermore, developers of BlocksCAD have a dedicated YouTube channel for design instructive videos. Like OpenSCAD, this is also free to use.

FreeCAD is exactly what its name implies ? a completely free CAD design software, open source to boot. It is quite good for most of the simple 3D modeling uses, considering that it wasn't intended to be a professional tool. It is capable of designing real-life objects of any size and is quite useful for basic civil engineering uses.

This software was not intended for pro usage, but to some extent it does get the job done. The best thing about FreeCAD ? beside the price ? is its user interface. It is very simple and clean, and will be meaningful to any beginner eve outside the engineering field.

Another online CAD tool in our list, TinkerCAD is geared for users migrating from AutoCAD. The software takes a back-to-basics approach to design, allowing you to generate basic 3D shapes and attaching them to form complex models. The brightly colored toy-ish models built in this program look funky and are easy to understand.

The online version of TinkerCAD populates a library with millions of prebuilt models great for using as starting points. The interface of this program is simplistic and appealing to even kids. The program is not complex and thus not a pro tool, but it is free and useable by anybody who can move a mouse, regardless of experience. 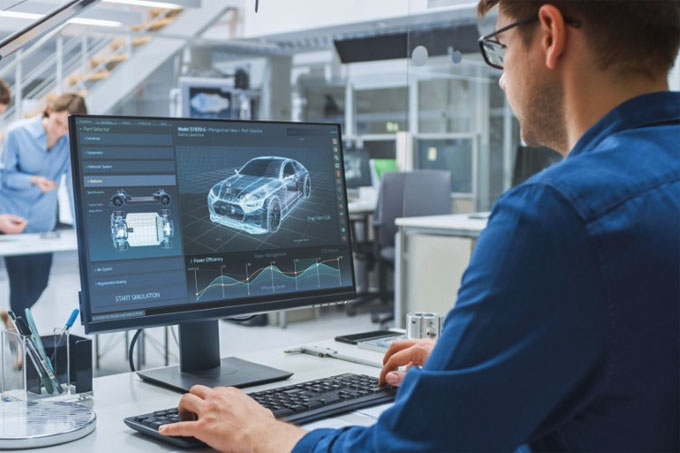