Vivoport is the app store for VR or virtual reality. It helps to explore, connect and experience the content that user likes. The Vive StudiosTM has launched their new tool. It increases the accuracy and detail of the 3D projects. It includes some cool features that give the user feel of reality.

It gives the feeling natural powerful and progressive medium for modeling the 3D objects. It introduces users with a new look of 3D modeling by connecting the virtual with reality.

The Vive StudiosTM, the virtual reality(VR) content development and publish initiative from HTC VIVETM and Sixense, a global leader in motion tracking and VR content has launched their new item MakeVR Pro recently. This VR content creation experience houses has an industry-standard professional CAD engine which enables the advanced 3D object modeling with VR. MakeVR Pro has some new features that have the attention functionally for creators which increase the accuracy and detail of 3D projects. It helps to meet the needs of the professional 3D designers.

It has added new tools to MakeVR for the careful alignment of the objects with the usage of grids and rulers, jigs, snapping, surface tracking, and mirroring. These tools create solid-model content with positional and rotational accuracy in their virtual works for anyone as per their age or experience. It helps to fulfill the demand for such control and opens new channels of creativity. This CAD-based content creation separates MakeVR Pro from the other apps. It provided showcase virtual reality as a natural, powerful and progressive medium for 3D object modeling. The tool bridges the gap between virtual and real workshops with the ability of exporting standard object files for 3D printing and has the direct linking within the apps for connecting with the online 3D printing service.

According to Joel Breton, GM of Vive Studios said that with this primary 3D object modeling tool users can combine objects with more carefully and ease as the carpenters do their work in their real-world shops. Amir Rubin, Co-founder and CEO of Sixense said that with the collaboration of Vive Studios they has made a simple and initiative solution for the professionals that provides a powerful but easy way to build 3D prints in a virtual environment. With an exciting interface based on natural two-handed motions, MakeVR takes full advantage of Vive’s room-scale VR for giving the creators a mesmerizing virtual space for exploring and design objects like never before.

About HTC VIVE: VIVE is a new virtual reality platform that is built and optimized for room-scale VR and true-to-life interactions. Vive has created one of the strongest ecosystems for VR hardware and software with the best class and game challenging technology for the customers, developers and enterprisers. The ecosystem is built around the best VR hardware in market that is supported by Vive X.

About Sixense: The Sixense Entertainment Inc. is a privately held company which focused on delivering the natural and emotional experiences in the virtual reality, enhanced reality and the other mesmerizing media. The company’s VR/AR platform has motion tracking technology, software and data for mobile, desktop and the console systems. It works with a vast range of partners from associations to multinational corporations for developing and advertizing products in markets which include entertainment, training, healthcare, 3D modeling etc. 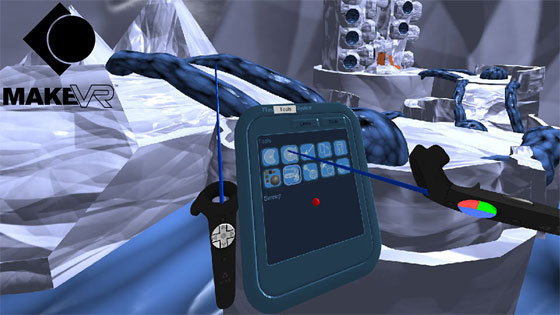