What is the difference between Fusion 360 and AutoCAD?

What is the difference between Fusion 360 and AutoCAD?

Both the CAD programs- Fusion 360 and AutoCAD are created by Autodesk. Even though both the software are CAD programs yet they have different approach when it comes to principles and methods. While Fusion 360 is focused on 3D modeling and manufacturing, AutoCAD is meant to deal with 2D modeling. The two programs are available on Windows and MacOS and can access the add-ins available in Autodesk app store giving it added advantages.

Fusion 360 is a newer software compared to AutoCAD. It was created in 2013 but soon became extremely popular due to its high accessibility and low price, offering even a free version. The Fusion 360 is made for 3D modeling parts and assemblies of a single machine, it cannot handle large projects such as construction building not just because it is heavy but also impractical to work using this method. Therefore, Fusion 360 is meant for mechanical modeling as it also has tools for free-form and solid modeling.

Along with the CAD process, Fusion 360 also has tools for CAM, simulation, animation and blueprint mode. The tool is widely used especially by hobbyists and professionals in engineering, CNC, 3D printing and industrial design.

In relation to industry AutoCAD is a popular software. If you are an engineer looking for a job then your AutoCAD abilities will always be important. Created in 1982 keeping in mind mechanical engineering and with years more functions have been added. From 2014 it gets an annual update.

AutoCAD provides a option between 2D and 3D modeling, where 3D is most widely used for visualization purposes and for all modeling and dimensioning 2D is used. Switching from one to the other is possible for adding measurements and layouts.

Even though AutoCAD was initially designed for mechanical design now it is used for much more. It now caters to the architecture, interior design, mechanical, civil and electrical engineering along with manufacturing.

AutoCAD and Fusion 360, both offer yearly subscription along with educational licensing (if your institution has a plan). Due to its industrial approach and a wider set of commercially-oriented tools and features AutoCAD is priced higher than Fusion 360. With the addition of AutoCAD toolset in 2019 it has made the application even more useful.

Priced at $500 per year Fusion 360 is available for both professional and commercial use. It offers a 30- days free trial along with full license for educational purposes. It also offers a free, limited version for personal use which is targeted towards the hobbyists.

The $1700 per year subscription to AutoCAD?s full version is intended for professional and commercial use.

The programs will run faster if your computer is powerful. Listed below are the system requirements for the programs:

It is advisable to have more than the required memory and storage to avoid sudden crashes and better performance.

Storage: A minimum of 10 GB of disk space (4 GB is used for installation, for processing data 6GB is used).

Memory: A minimum of 8GB of RAM (16 GB recommended for Windows).

The same principles are followed by Fusion 360 and AutoCAD as other CAD or drawing software. A menu for options and preferences about the document is provided along with a drawing space which is called ?Canvas? in Fusion 360 and the ?Drawing Window? in AutoCAD. A collection of tools is also provided to work from.

Open projects are organized in tabs from which you can switch from one to the other easily. The difference lies in which the projects are displayed: In Fusion 360 it is organized in separate boxes whereas in AutoCAD it is arranged in a way similar to the style of MS Word where all the menus are at the top of the screen displayed in tabs.

A blank project is shown when you first log into Fusion 360. Everything is organized in floating windows in Fusion 360. The application bar can be found in the top left corner along with tabs for any open files.

You can create projects or folders within projects using Data Panel. This helps to keep the projects organized. This also helps in managing other users who are collaborating on a project.

You can see your profile on the right side of the Fusion 360 window. You can switch teams to collaborate on different projects here, you can also access some settings and preferences.

You can choose your workspace where you want to work on the Main toolbar. The tools on the toolbar varies depending on the current workspace you are working in.

The list of everything that is available on your canvas can be found in the browser. This list includes parts, features applied to your parts, colors, assemblies or assembly parts, the units, and the materials.

The main area for the program is The Canvas. The Canvas is the area where you will be doing your modeling. You can find the commonly used tools in the Making Menu which you access by right-clicking inside the canvas.

Upon opening AutoCAD, you will notice a new drawing or the start page. The start page is divided into three sections: Get started, recent documents and notifications.

The blank documents start without format. They do not have any preset dimensions, layers, styles etc. You can add them annually and then save the settings as a custom template for the next time you use or you can even use the default settings provided by AutoCAD.

On top left of the window you will find a big ?A? which is the Application Menu. The application menu in the Fusion 360 was present in the form of a bar. The Application menu has the options for starting new documents, opening saved drawings, and saving your work. By double clicking the ?A? icon you can close the program.

The set of tools arranged horizontally is the Quick Access Toolbar. It has common tools for quick access. You can personalize it.

The most important part of the UI is The Ribbon. It is where you will find the complete set of tools. It is divided into tabs with many different tools for drawing, adding measurements and even for extruding depths among various others.

The drawing window is the black space where you will be drawing and modeling your project.

USE CASES AND APPLICATION

Up until 2020 the Fusion 360 program was a free software which gave an unlimited version for non-commercial use; therefore, it was favorable for the hobbyist. Along with functions for modeling, Fusion 360 also has comprehensive tools for 3D printing and CNC technologies like woodworking, therefore, useful for both personal and professional usage in the manufacturing area. It also has animation and simulation functions making it an alternative choice for engineer who might not want to use heavy software.

Print City which is a university 3D printing lab in England also serves many engineering projects across the nation had an interesting case. The need was to increase the weight of filament that was stored on top of a 3D printer while keeping the support lightweight. By using the Fusion 360?s generative design they were able to achieve a support system which could sustain three times more filament than the original part.

Based in Barcelona the Addit-Ion also has a case where they used Fusion 360 and generative design to create the first 3D printed snowboard binding which was to be lighter and more durable than traditional bindings.

Owing to its high price, AutoCAD is inaccessible to hobbyists, but it is an industrial standard across a wide range of professional settings. It is widely used in architecture and interior design as it comes with various options which are specifically aimed for the industry. AutoCAD is also able to provide marketing-specific features like photorealistic renders of finished products which can be displayed to clients.

The focus of AutoCAD, historically, has been 2D work and later blueprinting which is why it is the go-to program for floor planning, mechanical modeling, piping, interior design and many other such uses. It also provides drawing and simulating circuits which make it a popular tool in electrical engineering. It, as mentioned previously, provides industry-specific toolsets to speed up the workflow.

Among the multiple customer stories is the case of Martz Technologies who used AutoCAD Electrical toolset to increase their standard to a higher level. AutoCAD was used to redesign and improve existing control systems thereby allowing them to automate their plant. In the Simon Denness case, AutoCAD was used along with Revit to design houses and to make adjustments in real-time according to his clients? desire.

Company: Fusion 360, people can find solved problems which other users have faced along with the frequently asked questions in the company forum. A learn and support section is also there using which one can learn more through webinars, self-paced workshops, and virtual classes.

Community: YouTube has a number of tutorials ranging from beginners to advanced level. There are also tips and secret cheats along with how to work with CAM and many more. Sites which are involved in design also share tips and tutorials, for example the Fusion 360 subreddit.

Company: AutoCAD. The company has its own support and learning section. There are frequently asked questions regarding installation, account management, and plug-ins. The learn section consists of series of video tutorials which one can use according to their need. There is also a forum with solved questions where one can find solution to problems which others have faced and is also answered.

Community: YouTube has a vast range of tutorials consisting of a variety of topics. Other sites also offer detailed tutorials from the beginners? level to the advanced level in AutoCAD. AutoCAD subreddit provides one the platform to ask questions to other users. AutoCAD has less community information available than Fusion 360 as it is not much used by hobbyists which makes formal instruction the more common way to deal with the software.

They are different in terms of the tools and purpose that they offer. AutoCAD though priced high provides you with a wide range of tools for specific functions. It is an important software for engineers and architects. AutoCAD is preferred for working on industry-level designs by architects, electrical engineers as well as interior designers.

Fusion 360 is an affordable option which offers comprehensive tools for 3D modeling, blueprinting, simulation, animations, woodworking with CNC and even 3D printing. It is mostly used by hobbyist. The limited free version is also a good option for non-commercial use. 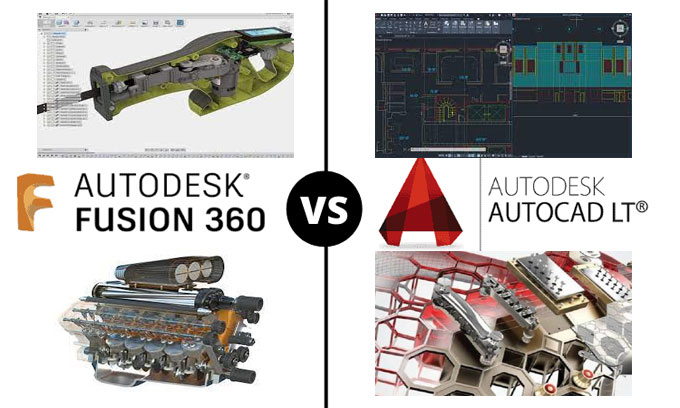