Autodesk® Formit® 360 is used to capture building design concepts for the appeared ideas. Those ideas are created in a compact digital format which will be used in the real-world site information like satellite images, for orienting the designs. Real building and environmental data is used for supporting design brainstorming. Preliminary designs are changed to centralized data storage for accessing and refinement in Autodesk® Revit® software or other applications.

This Formit360 released a lot of new goodies and also released an updated version for Ipad Pro, a Windows version and integration with Dynamo. The released notes followed:

• Internet connection is not needful for working in Formit360 when Formit360 Pro or trial is validated
• Online works is need when it is connected to the Formit 360 services like A360 Drive, Insight 360, Real-time Collaboration, Google Maps etc. and many more
• It can be modeled and navigated easily with the touch-enabled Windows devices with the use of the finger, stylus, mouse and keyboard
• Scripts can be placed and flexed from Autodesk Dynamo Studio
• The modeling tools are Shell, Filet, Mirror and many more
• The export options are Export Visible and Export Selected
• Exported file types are FBX, SAT, DAE, DXF
• The files such as SKP and SAT could be opened and imported directly to Formit
• The Visual Styles are like Monotone surface for an exquisite rendering effect
• For removing the material easily paint is done with the use of default material
• The area per level are viewed
• The user need to view the nested groups to select the groups from a tree view
• Then Ungroup All and the Model
• High DPI screens will be seen in high resolution icons with full clarity
• Keyboard shortcuts are Customized, Imported, Exported
• Next add, remove and relocate the toolbars, then set the UI theme in blue or white

Release Notes for Formit 360 for iPad and iPad Pro:

• It has the full support for iPad Pro resolution
• Formit 360 now supports the Apple Pencil. So the user can sketch more flawlessly and can use pressure for locking into a selected axis
• There will be some sound when anyone snapped to a point and moving along in an axis. It also disable the Settings menu
• There are new actions for undo and redo. For undo double flick to the left is needed and for redo to the right
• There is a new monotone surfaces for a subtle visual style
• It has improved performance, reliability and accuracy in Insight 360 Energy Analysis
• It has improved its performance for fixing the bugs

Release Notes for Formit 360 for Web:

• File operations are organized for allowing local and A360 Drive access
• There are monotone surfaces for a subtle rendering effect
• Export options are Export Visible and Export Selected
• Modeling Tools like Mirror, Offset Edges, Extrude Edges and many more are accessible here through keyboard shortcuts
• It has improved performance, reliability and accuracy in Insight 360 Energy Analysis
• It has improved its performance for fixing the bugs

Release Notes for Formit 360 for Android has improved their performance and fixed the bugs. 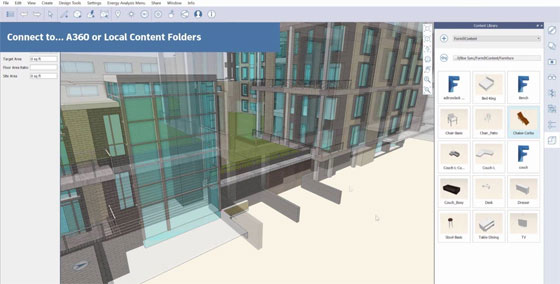